Please click on link below as the pictures are so informative but won't copy into this blog well.  (Big thank you to Mike for sending this article my way - it is spectacular!)

Nashville, we are working hard to get you sidewalked and to change the culture to a walking one.  I am personally 2 years into this project.  Change has been slow but our new mayor seems interested in increasing funding for sidewalks - a step in the right direction.

Now is the time to contact your council person and discuss with your neighbors where sidewalks are needed in your community.

In regards to culture, since there has not been a major public health campaign to educate drivers that pedestrians do, in fact, have the right of way - please learn now that you are to yield to them if driving.  Even though there is no law - give them 3 feet as you would bicycles.

Thank you for being interested in walkability in Nashville!

I'll be speaking in Paris today - 21 November 2015 - about bicycle urbanism and lessons to be learned from Copenhagen.

Paris has declared that it aims to be the world's best bicycle city in the world by 2020. This is simply not possible with the current sub-standard understanding of Best Practice infrastructure. The current Mayor Anne Hildalgo, has some good ideas, which we've reviewed here, but until the City understands the basics of bicycle infrastructure,  not much is going to happen.

While there are good examples of the City employing Best Practice infrastructure (above left) there are still strange things imagined in the heads of engineers and planners who have little idea of how to do it. Like the weird bi-directional stuff you see like above, right.

Or using bus lanes as bicycle lanes on long boulevards where buses can get up to speed (above, left), or strange turn lanes like atabove, right.

Best Practice has been established. It's ridiculous to try and reinvent the wheel. Copy-paste. It's that simple.


If the iconic Champs-Élysées were to be done properly, it would look a bit like this. We would probably run a wide, green meridan down the middle to further reduce the traffic so it didn't keep on looking like a Robert Doisneau photograph from the 1950s:

It's all so simple. Paris should realise that. 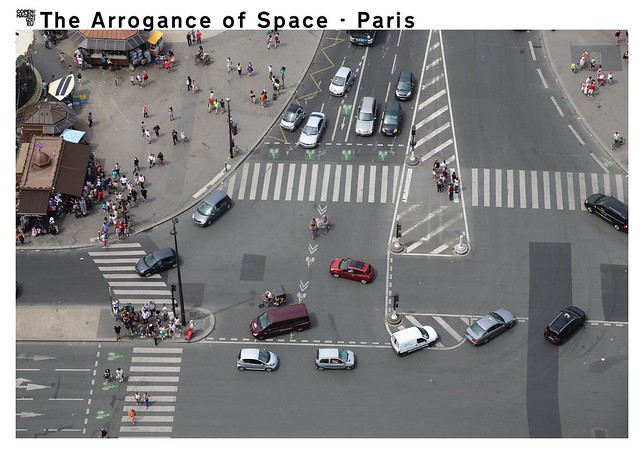 Safer, better, more modern. A total redemocratisation of the urban space. Benefiting pedestrians and cyclists and taming the most destructive force in cities - the automobile. This is designed for humans. Not engineered for cars.

It's simple if Paris wants it to be. If they dare to do it. Without this kind of redesign, they will do little for modernising transport in the city. 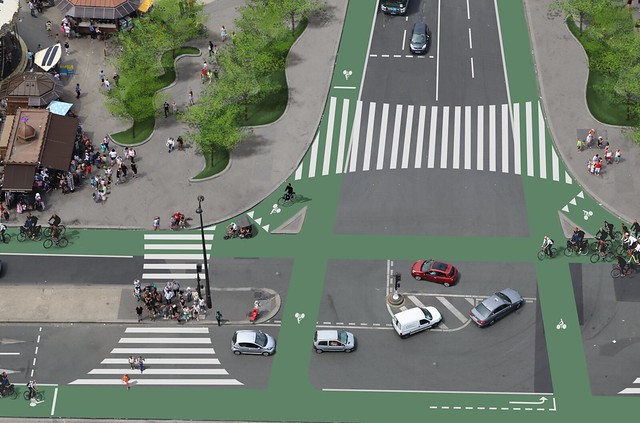 
Posted by Shade Parade at 7:20 AM No comments: