How Franklin TN is building up its sidewalk network


Filing the gap: How Franklin is building up its sidewalk network

Students walk in front yards along Highway 96 West in Franklin because in some places there are no sidewalks. (Photo: Shelley Mays / The Tennessean/File)

While training for ultramarathons, Liz McClain will weave her way around Franklin, using both sidewalks and roads. She has also trained other athletes for races over the last 15 years.
"I remember when I started I would be nervous to run on roads against traffic," McClain said. "I do it all the time now so I am not as unnerved by it. But my husband will only stay on the sidewalk. He runs every day, and he’s nervous without a sidewalk. He doesn’t want to get on the street next to a car. It doesn’t feel comfortable for him and a lot of other runners I know."
Franklin runners who stick to the sidewalk have some new route options. Crews will finish up a new sidewalk extension from Ralston Lane to Mack Hatcher Memorial Parkway on Highway 96 East. And for the last two years, the city has quietly placed seven new sidewalk segments, with two more on the schedule to be completed by 2019.
Story from Publix
Meals to make this summer
Story from Publix
In 2016, the city began allotting $250,000 per year to sidewalk construction for a period of five years. By 2022, Franklin leaders will have invested $1.2 million in improving the sidewalk network.
"It’s designed to pick off fairly small projects," City Administrator Eric Stuckey said. "It’s been important work, and it has great impact to connect neighborhoods. We have seen a positive impact the last two years, and we look forward to seeing what we can do in the next three."

In late May, Stuckey said he and other leaders were starting to discuss the potential of a new sidewalk in the Willow Springs neighborhood.

Stuckey said neighbors have expressed a desire for connection to the Williamson County Soccer Outdoor Complex.

"We have conversations like these every two weeks with our staff about capital improvements," Stuckey said. "The details of that new sidewalk are just in the stages of being hammered out."
The dedicated funding has already allowed crews to install sidewalk connections for two large gaps in the network this year.
Street department members recently upgraded an existing sidewalk along South Royal Oaks Boulevard . The system now connects the Creekstone and Forrest Crossing neighborhoods to the future Mack Hatcher Memorial Parkway multi-use trail.

The 2018 Williamson Outlook trends report — produced by Williamson, Inc. — shows economic growth is spurred when residents can find ways to better their health. Currently, Williamson County is ranked as the healthiest in Tennessee, according to the 2018 Robert Wood Johnson Foundation health survey.

Franklin Tomorrow executive director Mindy Tate surveyed residents in 2017 about what they wanted to see in the sidewalk network. The nonprofit got 200 responses.
"People see how easy it could be if the proper installations were made of sidewalks or multi-use trails," Tate said. "They want to be out and enjoy our community, so I think they are looking for ways to walk, and it has to be safe."

Tate and her nonprofit provided those responses to the city, and she thinks they helped Franklin engineers identify gaps in the network.
"I think it had some impact on furthering the realization that small projects make a big difference," Tate said. "We are seeing more people wanting to get around Franklin on foot."

Bigger sidewalk initiatives will soon start in Franklin.
Crews will finish the Highway 96 East sidewalk this summer, while starting on an additional segment on Highway 96 West from Freedom Middle School to downtown Franklin.
Engineers have also started work on a $14 million streetscape plan, which will provide a long awaited connection on Franklin Road. A new sidewalk would extend from the Park at Harlinsdale Farm to First Avenue.
With Phase II of Hillsboro Road improvements complete, the city will connect that new sidewalk during the northwest extension project on Mack Hatcher Memorial Parkway.
Projects the city finished from 2016-2017:
Projects slated for completion by 2019:
Reach Emily West at erwest@tennessean.com; at 615-613-1380; or on Twitter at @emwest22.
Posted by Shade Parade at 2:45 PM 1 comment:

Two on Scooters Struck in a Hit and Run in Nashville, TN

Nashville is woefully behind when it comes to providing safe passage for those other than in cars...this is just another example.

2 scooter riders involved in a hit-and-run

NASHVILLE, Tenn. (WKRN) - Two women on scooters were critically injured after a hit-and-run crash in downtown Nashville.
Officers responded to the call at Union Street and Fifth Avenue Sunday evening.
Police said the victims, a 27-year-old and a 28-year-old, were riding Bird Ride Scooters northbound on Fifth Avenue when a car, going westbound on Union Street, struck both riders.


Both women were taken to Vanderbilt University Medical Center.
Police officials confirmed they called the fatal accident team in as a precaution.
The driver was last seen driving a black Lexus. Police said it sustained noticeable front-end damage.
Police said there are conflicting reports as to whether the Lexus or the scooter riders had the red light at the time.
Police said neither women was wearing a helmet at the time.
Anyone with information on the crash is urged to call Crime Stoppers at 615-74-CRIME.
Bird Scooters is a new business that rents scooters with electric motors in downtown Nashville. The company is based in Venice, California, and advertises environmentally friendly transportation.


Company spokesman Kenneth Baer released a statement about the incident, saying, "Our hearts go out to those impacted by the car accident today in Nashville in which two Bird riders were injured. According to published news reports, the riders were crossing a crosswalk while a motorist ran a red light, struck the riders, and fled the scene. Rider safety is a top priority at Bird, and we will work closely with law enforcement on the investigation."
Last week there were complaints about scooters obstructing the right-of-way downtown. The mayor said he wants to come up with some new ordinances to address potential problems.
"We appreciate innovation that helps people move around the city, but it's improper to obstruct the right-of-way without a permit. With no ordinances, or agreements in place with Bird, Metro has reached out to the company to amicably resolve the situation."
The investigation into Sunday's hit-and-run crash remains under investigation.

Posted by Shade Parade at 3:14 PM No comments:

Instead of a Transit Referendum, How About a Pedestrian Infrastructure Referendum?


Instead of a Transit Referendum, How About a Pedestrian Infrastructure Referendum? 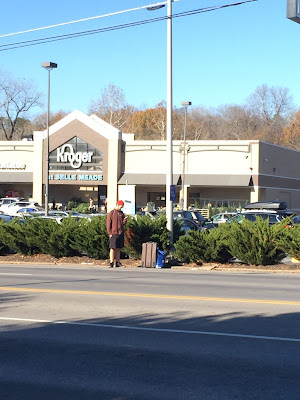 
We valet our cars when there is visible parking a block away.  We complain about traffic and yet, without a safe way to walk, getting out on foot is for the few:  those who have to and those who are determined.


I voted for transit but worried that we were putting the cart before the horse.  Without obvious ways to get to transit (safe, well designed sidewalks so you could walk to your destination) it did not seem clear how this was all going to work.


Frankly, our track record on transit and sidewalks are not good.  We still have sidewalks missing from 75% of our roads.  Our bus stops are not inviting or safe. 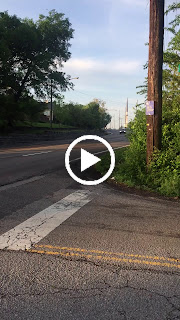 Examples of bus stops in Nashville


Pedestrians, in any concentration that matters, can only be found in a few areas such as the Gulch, 12th S, Downtown.  The vast majority of Nashville lacks decent walking infrastructure and therefore only the brave or those who have to walk.  Herein lies the root of the transit argument.  If stepping off the bus leaves you literally in no-man's zone, how do you argue that more buses or different kinds of buses are needed?


We need to have a SIDEWALK PLAN that makes real progress fast and has a completion date set.  Citizens need to have walking as an safe option and then transit will naturally be a logical next step.


Posted by Shade Parade at 8:18 AM No comments:

Thoughts on Moving Sidewalks to Our Top Priority, Post-Transit Referendum...

Walking is useful in restoring my faith in humanity.

Generally, you are guaranteed something a little surprising, whimsical even.

***
Now that the Transit Referendum is over, it is time to take inventory.   Refocus.  Did it fail, in part, because transit is somewhat unthinkable in our current state?  Our city lacks sidewalks on 75% of our roadways.  This plays a role in our psychology around transit. When we imagine walking to the bus stop, we literally cannot find safe passage.

With this is mind, I feel like Nashville may have put the cart before the horse with the recent transit plan.  Imagine, instead, if we took the transit funding and built the best tree-lined sidewalks on all our streets.  Envision a well designed network that allowed you to have distinct comfortable options on foot.

Without well designed walking infrastructure, engaging Nashvillians around transit seems challenging, somewhat unthinkable.  If you cannot safely and comfortably walk, you cannot wrap your head around transit as a viable option.

***
Nashvillians have been asking for sidewalks for years.  Mayors have run on sidewalks.  Things are a touch better but not by much.  I vote for taking the energy around transit and putting it into sidewalks.  Now is the time.

Posted by Shade Parade at 1:23 PM No comments: