Many cities have space that is underutilized but could
become fantastic park-like draws or pedestrian infrastructure.

Many spaces in cities are underutilized.

My only comment on these images ---> I would argue for
a bit more shade to encourage lingering and provide comfort!

Comment
Tya Abe › Bridging the Gap: 7 Bridges Prioritizing Bicycles and Pedestrians
The 20th century was the century of the automobile. This drastically changed the way in which people lived their day-to-day lives, in turn influencing societal and cultural values, the economy, architecture, urban design and as is alarmingly evident today, the environment. The ability to travel greater distances in less time enabled families to establish homes farther away from the cities where they worked. Infrastructure and cities were molded into the image of the car, land cleared for roads and parking lots.
Today, we are faced with the challenges of our dependence on cars. Cities across the globe are dealing with congestion issues in an era when a reduction of our carbon footprint is critical. The solution lies in alternative forms of transportation. Bicycles, certainly not a new technology, are one piece of this solution. They provide the independence of a car and are healthy for both the human body and the environment.
Infrastructure is an important component of promoting cycling as it improves its convenience and safety. Providing bicycle storage, designated paths and bridges all contribute to this and show that the needs of cyclists are being heard and supported.  This is exemplified by the following examples of bicycle bridges. Sculptural and immensely useful, they have made commutes that much easier and shorter for bikers and pedestrians, similar to the way the car once made life easier. There exists a certain sense of contentment and awe as one cycles across any of these bridges; an uncrossable obstacle has been overcome as one travels suspended safely over water, air and in some cases, busy streets. 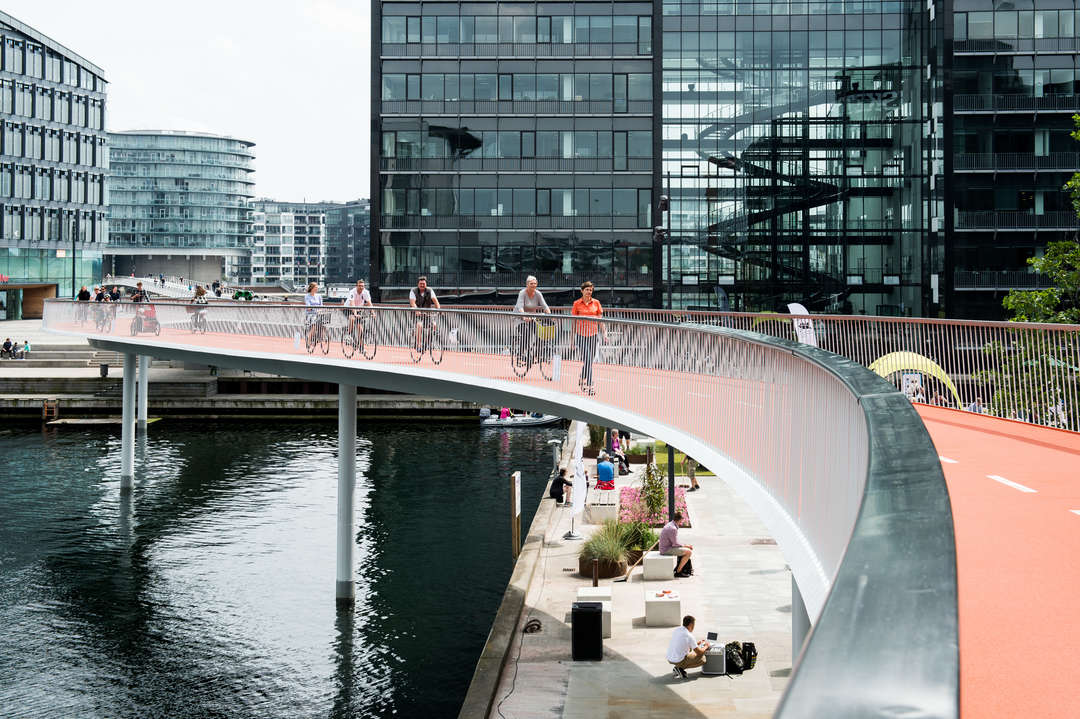 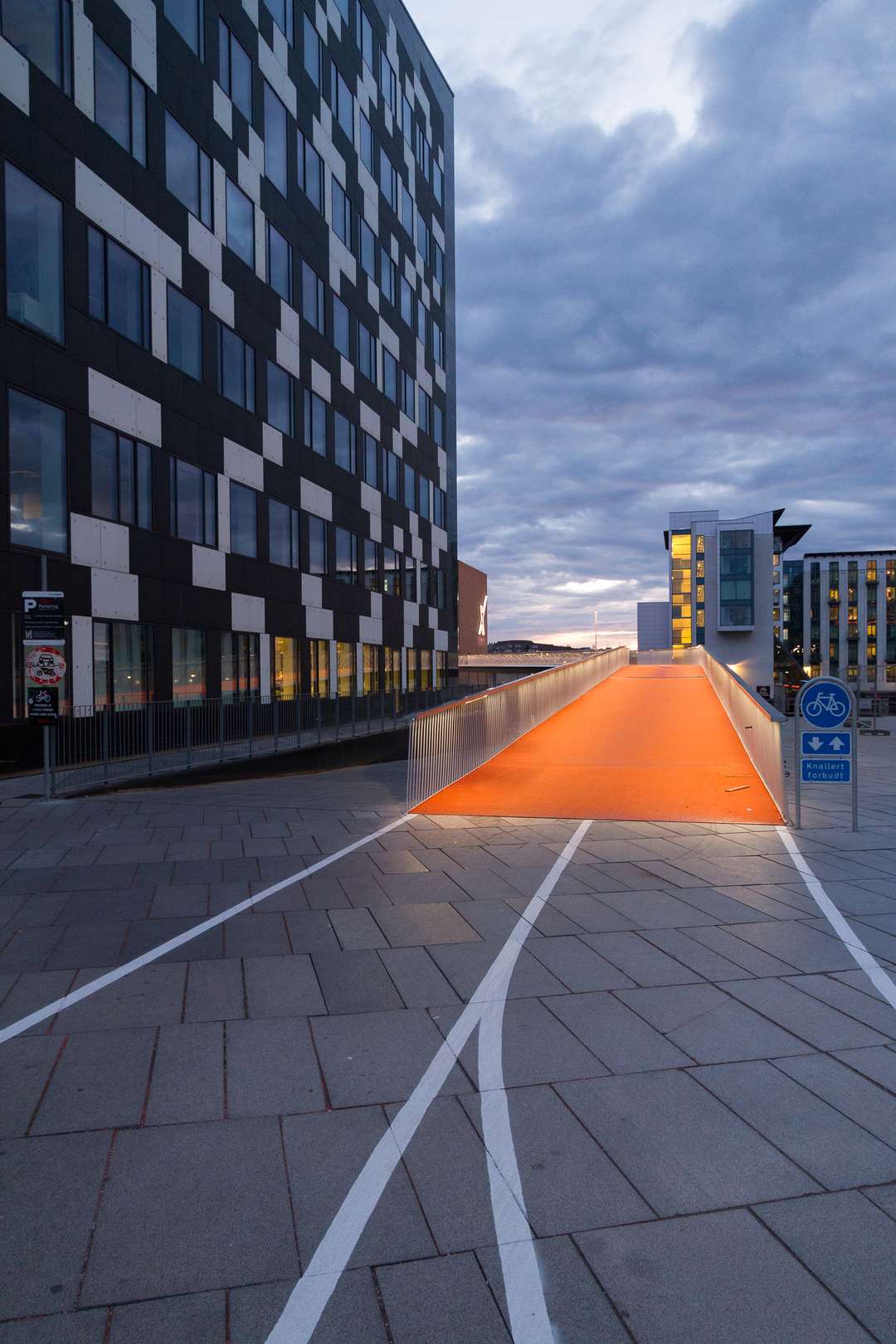 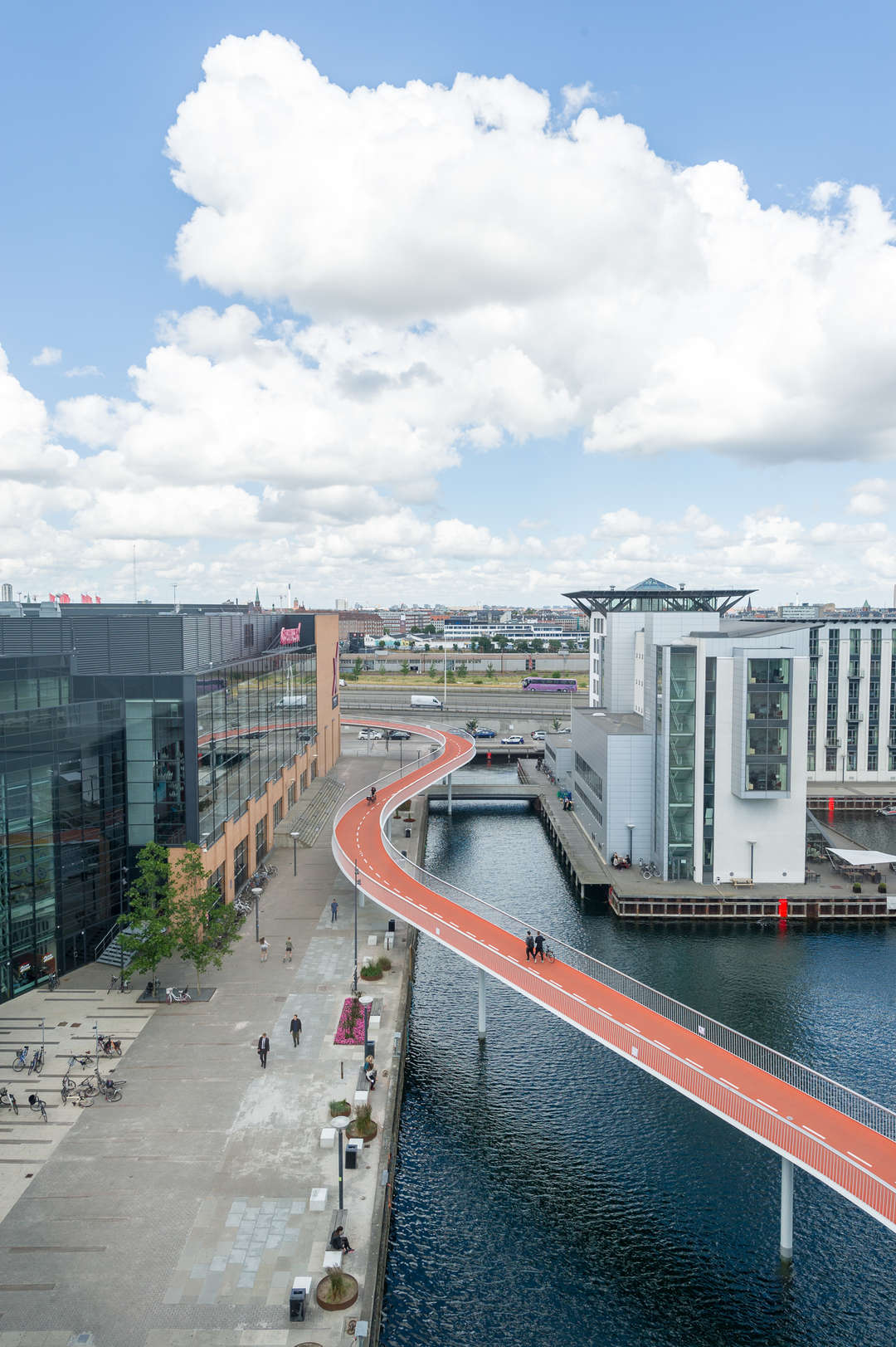 CYKELSLANGEN by DISSING+WEITLING architecture, Copenhagen, Denmark
Cykelslangen (‘Bicycle Snake’ in Danish) is a bicycle-exclusive bridge that creates a safer connection between two popular urban neighborhoods of Copenhagen by separating cyclists and pedestrians. The bridge provides a convenient commute for cyclists who no longer have to avoid the large number of pedestrians coming to and from the shopping center nearby. The eye-catching orange path snakes its way through buildings and over canals, providing a unique perspective of the city and harbor that can only be accessed by bike, further incentivizing biking over driving. 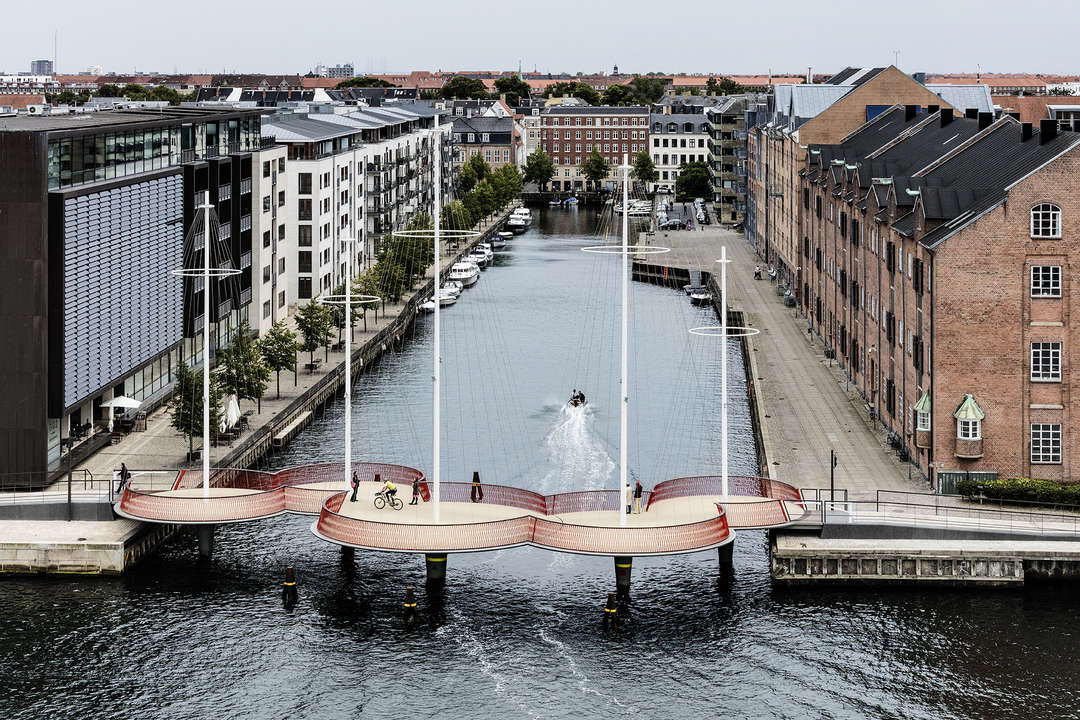 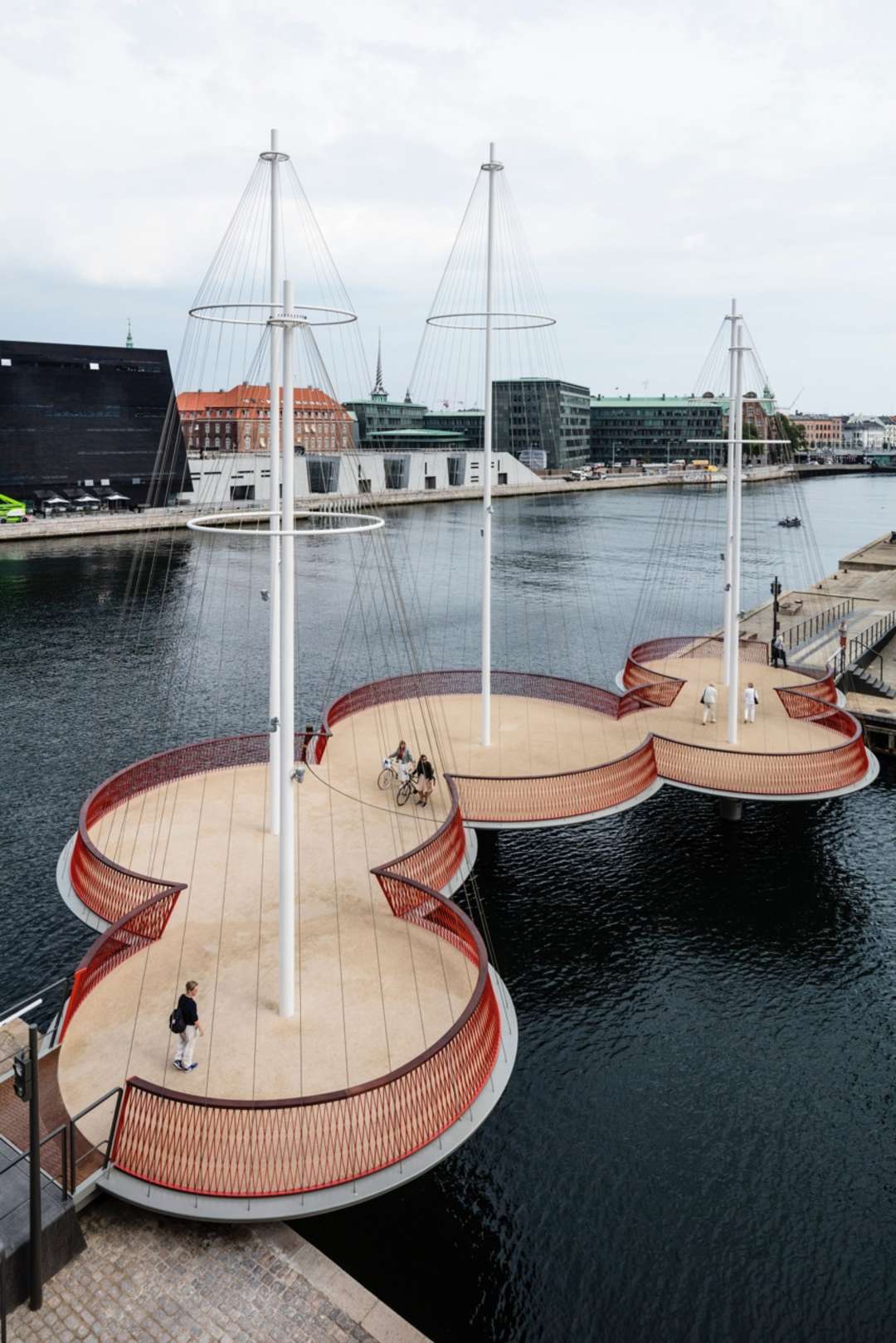 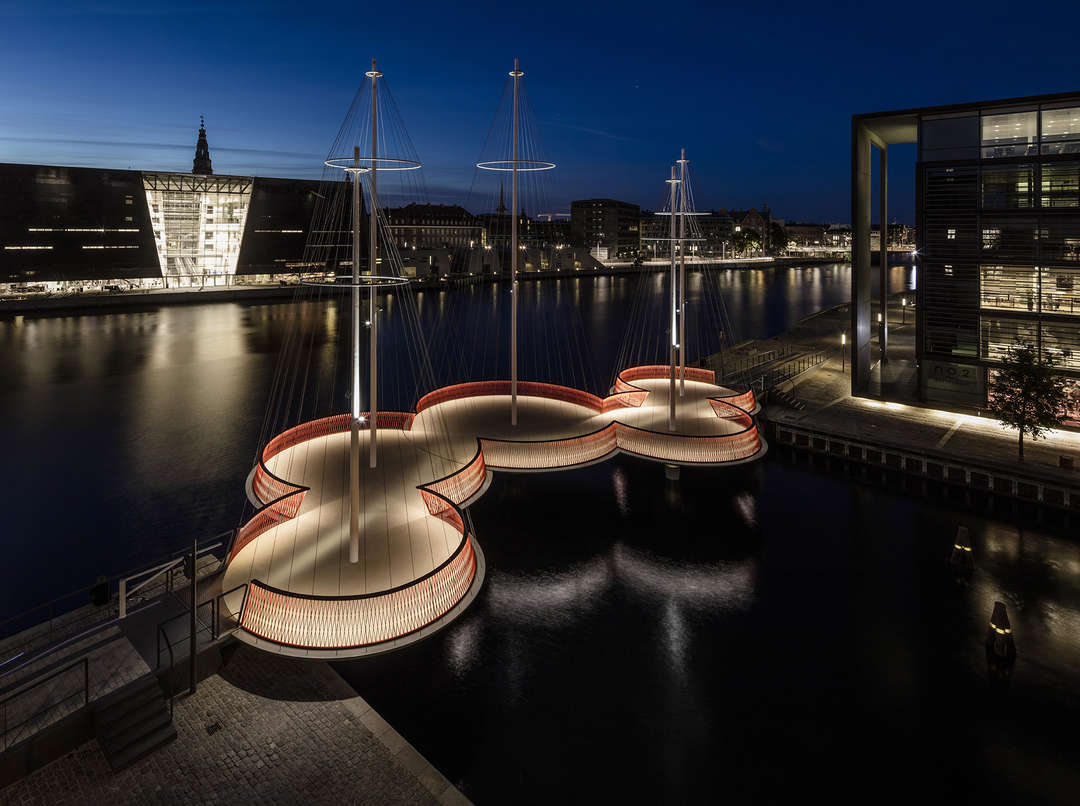 CIRKELBROEN by Studio Olafur Eliasson, Copenhagen, Denmark
This bridge, designed by world-renowned installation artist, Olafur Eliasson, sits in a central location of Copenhagen’s harbor canal, directly across from the Royal Danish Library. The bridge was inspired by the city’s maritime history with its ‘masts’ creating a silhouette of ships when seen from afar, particularly when lit at night and reflecting on the harbor water.  The non-linear path across the five circular platforms invites pedestrians and bikers to slow down and take a moment to experience the harbor and its surrounding life from a new perspective. 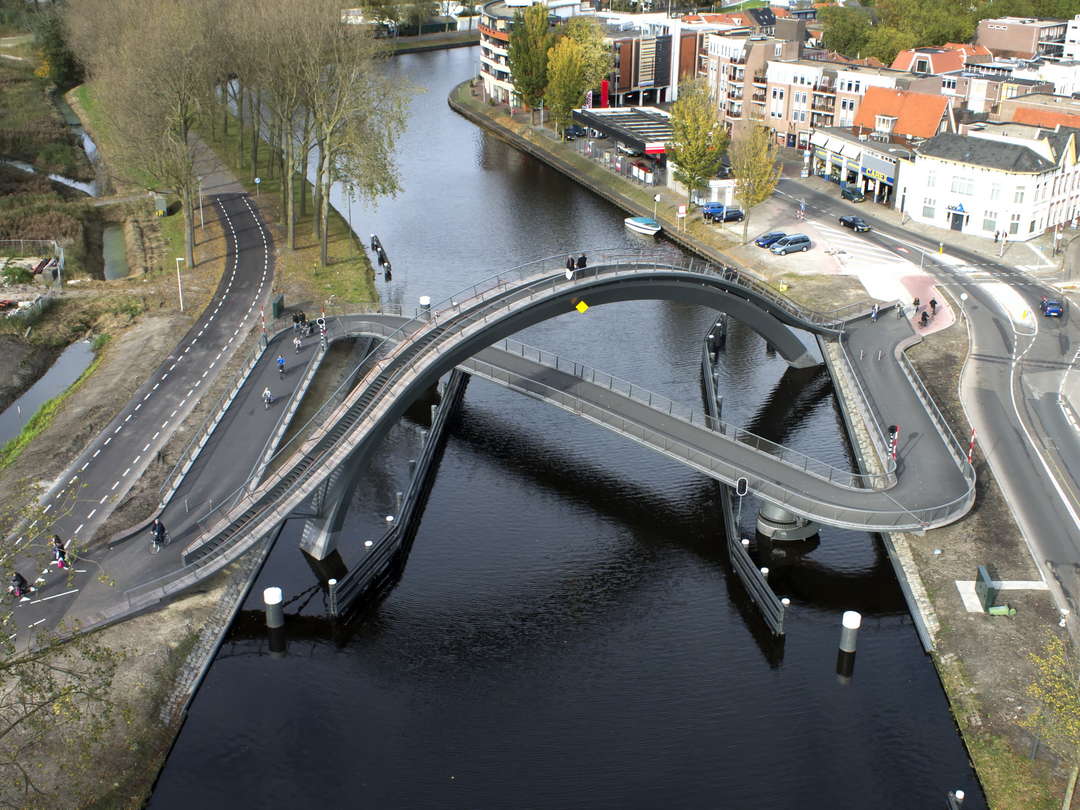 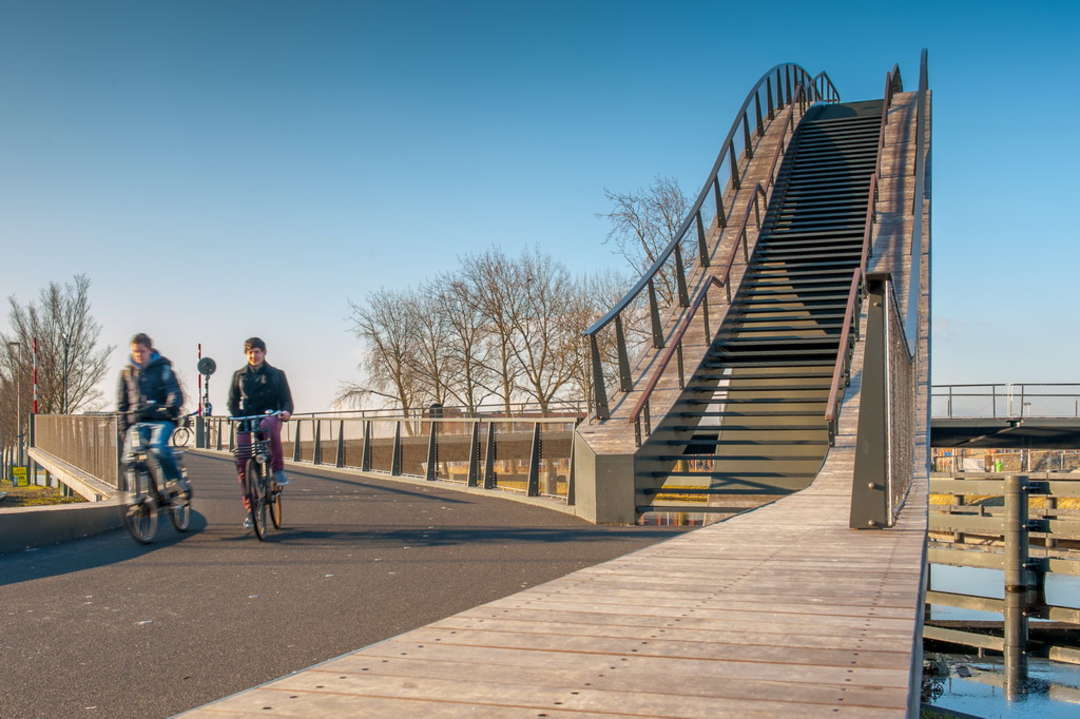 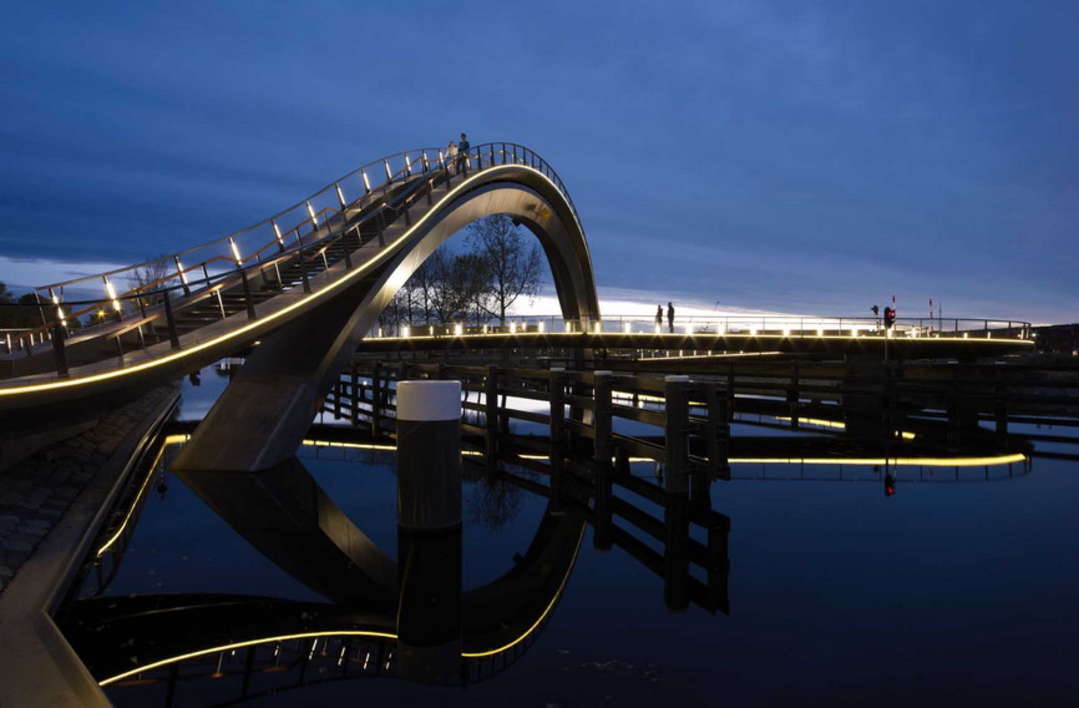 MELKWEGBRUG by NEXT architects, Purmerend, The Netherlands
Melkwegbrug continues the Melk Weg (‘Milky Way’ in Dutch) by connecting the Weidevenne district to the historic district.  In connecting two different elevations, the bridge had to be at least 328 feet in length in order to achieve the ramp angle required for bicycle and wheelchair traffic. This provided the opportunity to separate bicycles and wheelchairs from pedestrians, with the bicycle path snaking across the water and the pedestrian path being a steep, Dr. Seuss-like arch that seems to jump from one side to the other. The flatter bicycle-wheelchair path can be opened to allow boats to pass through the canal. 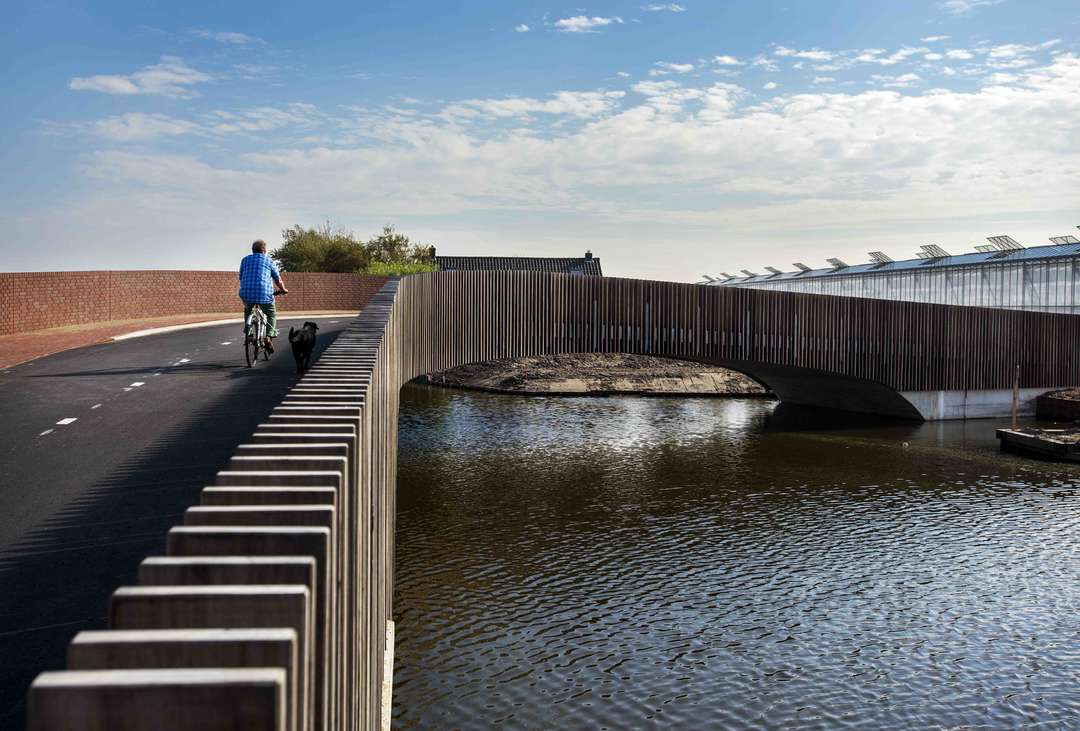 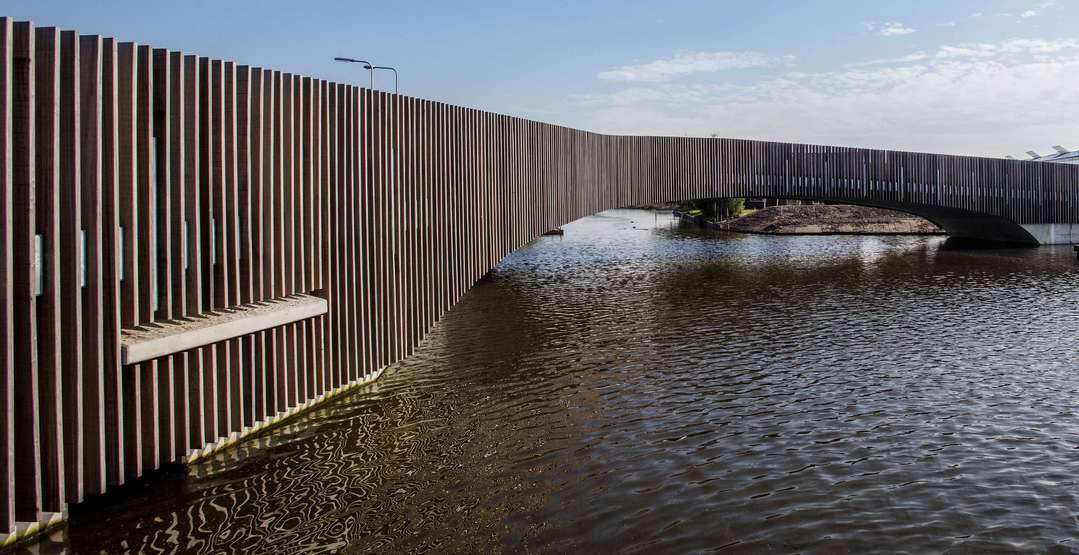 VLOTWATERING BRIDGE by NEXT architects, Monster, The Netherlands
This bridge aims to meet the needs of three users: bikers, pedestrians and some unexpected winged friends, bats. Being located on the flight route of several bat species, the bridge consists of an 82-foot grooved concrete arch that provides a stable and suitable climate for bat nests. This under-bridge space is made accessible through entrance slots that have been left rough to allow for better grip. The north abutment is meant to be for winter roosting while the deck is meant for the summer. 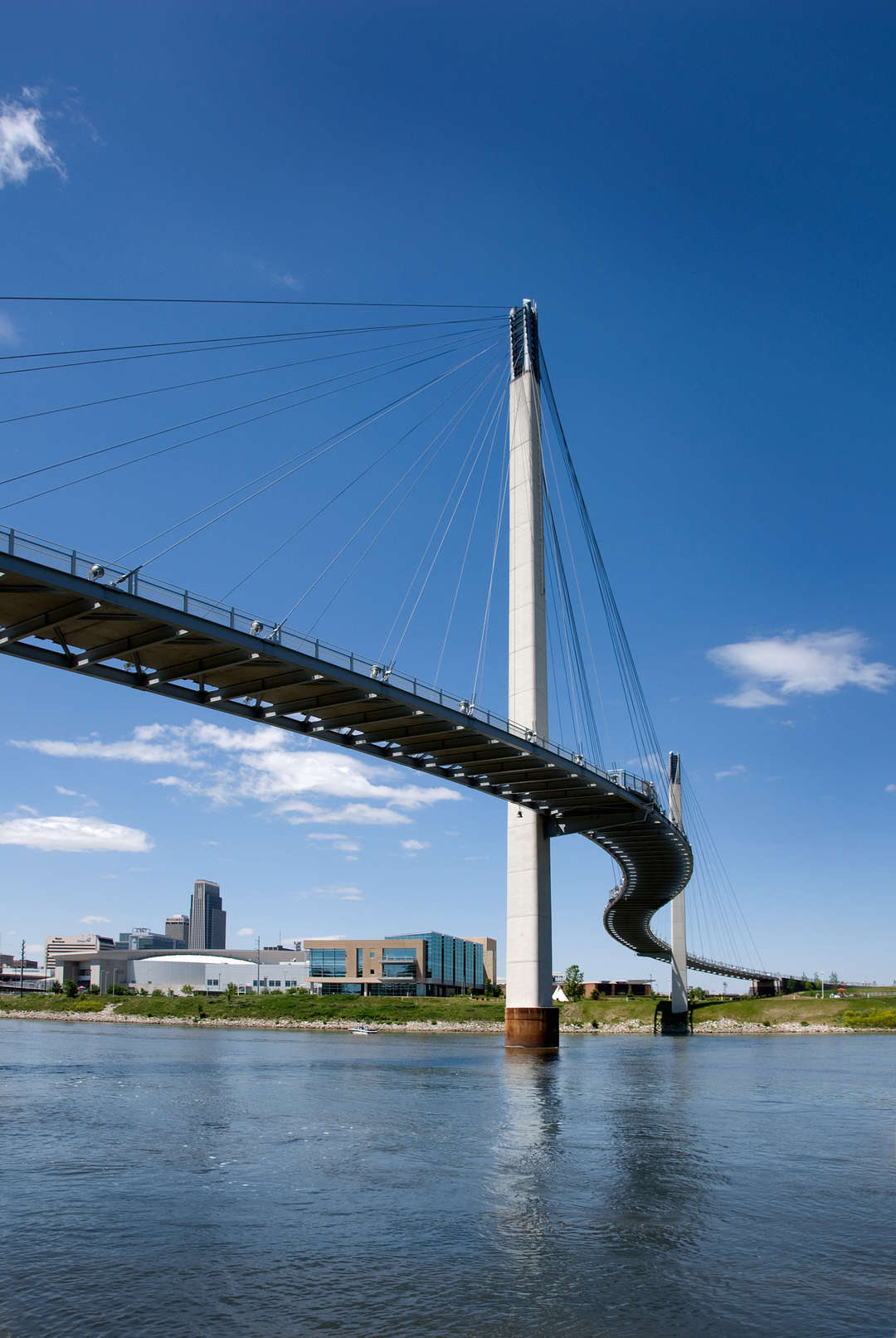 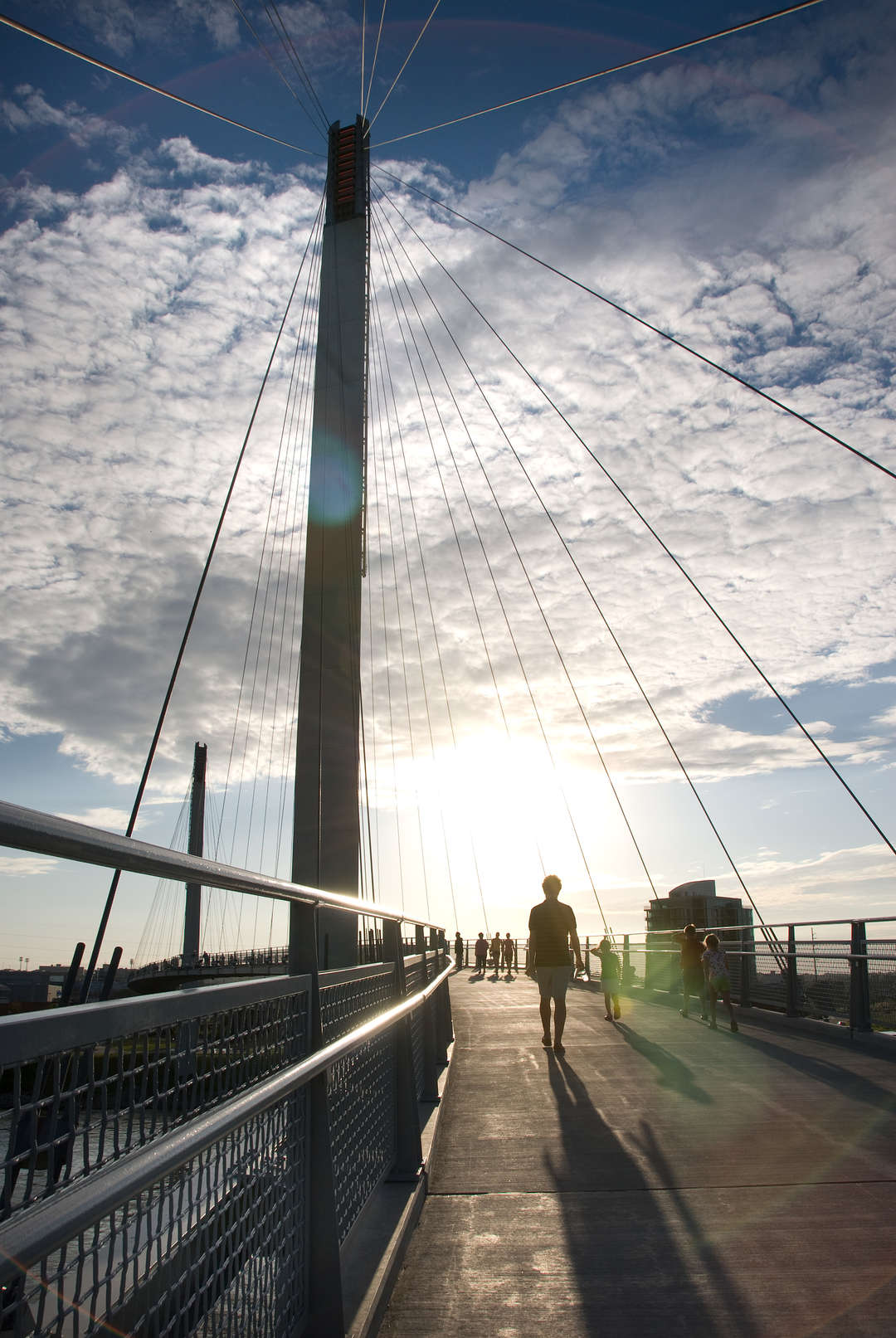 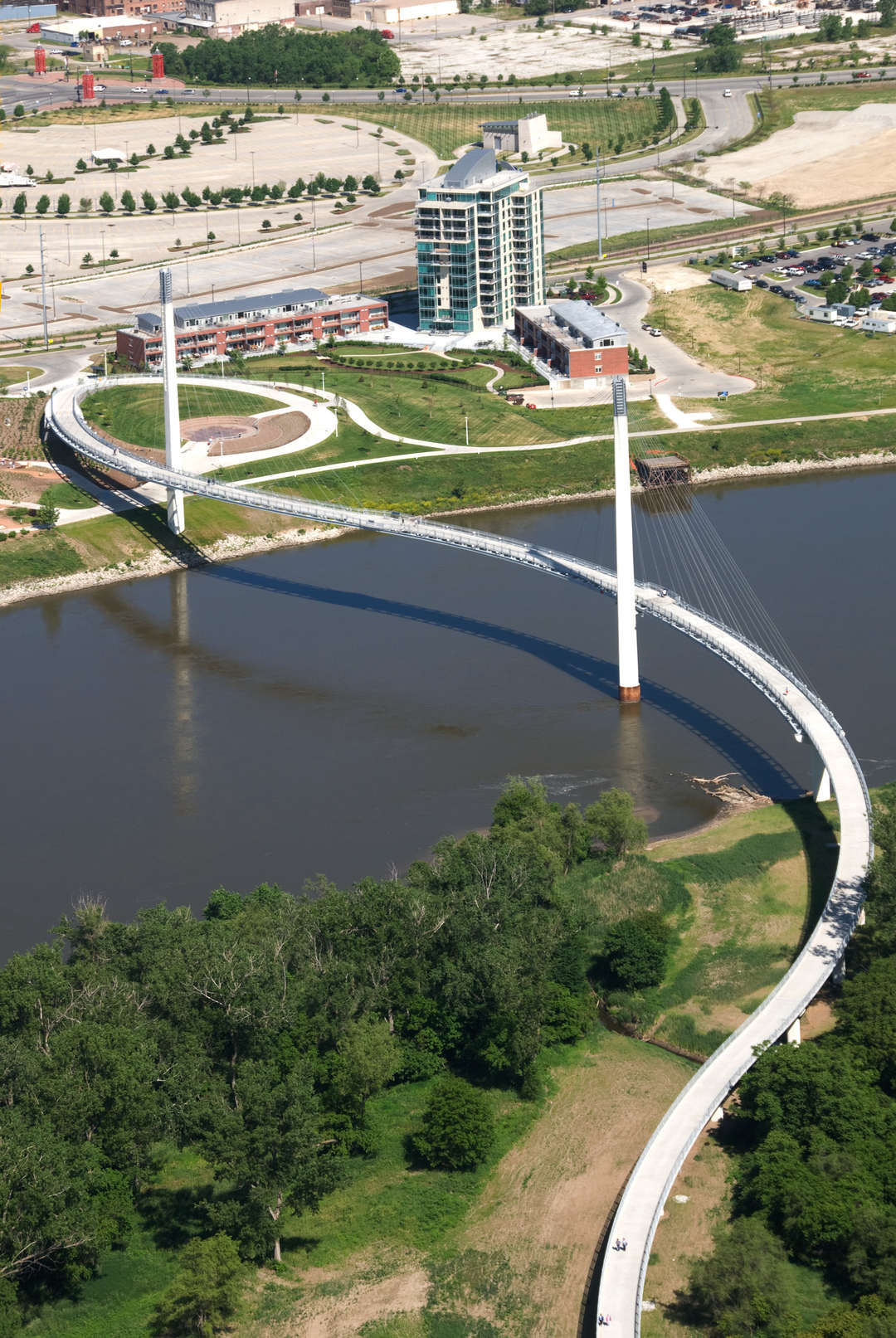 BOB KERREY PEDESTRIAN BRIDGE by HNTB, Omaha, United States
When completed in 2008, this steel bridge was one of the longest pedestrian bridges in the world spanning 2,300 feet across the Missouri River and Nebraska–Iowa border. Built as part of a riverfront revitalization effort, the bridge was designed with consideration of migratory birds and includes interactive sculptures to create awareness of the endangered species that share the river with pedestrians and cyclists alike. 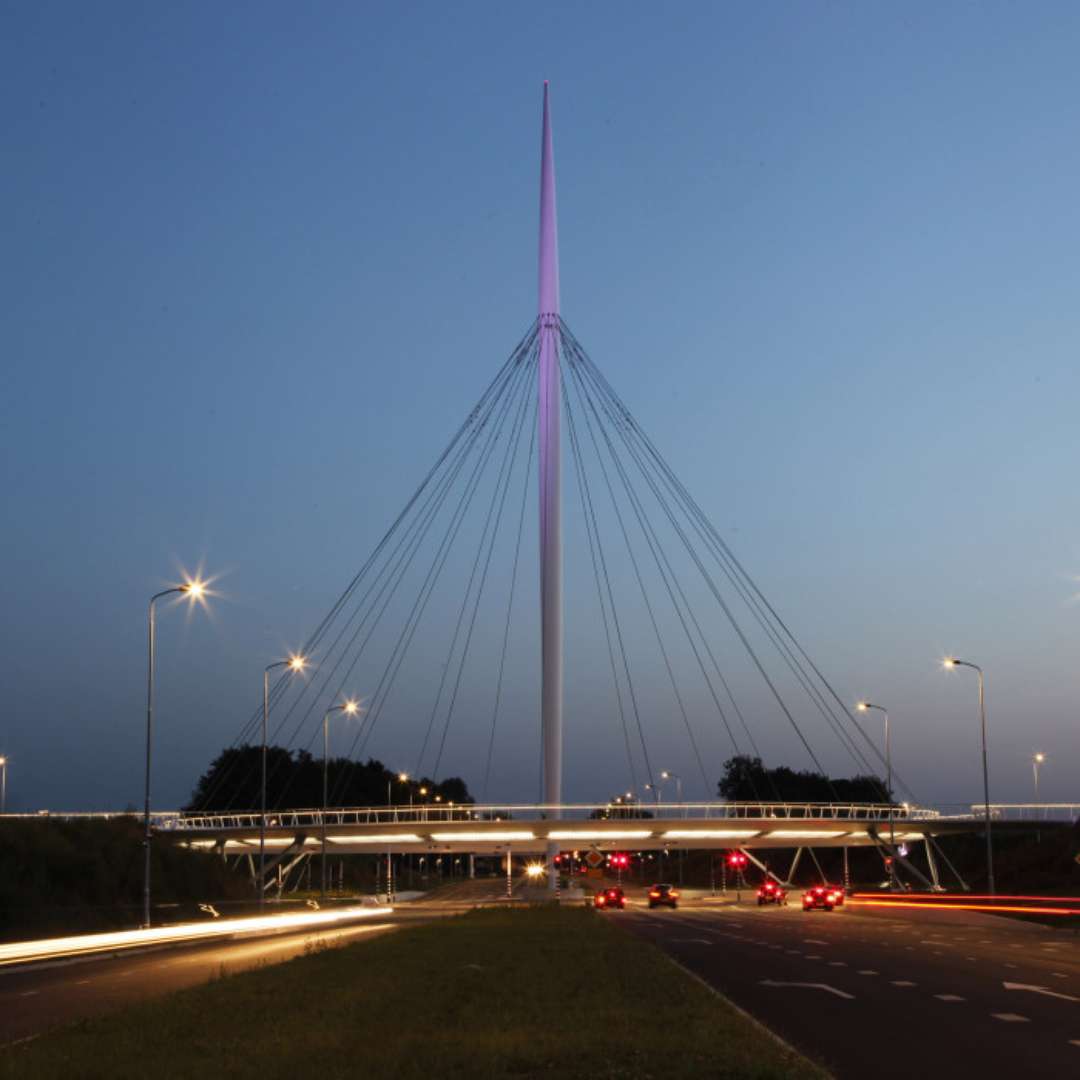 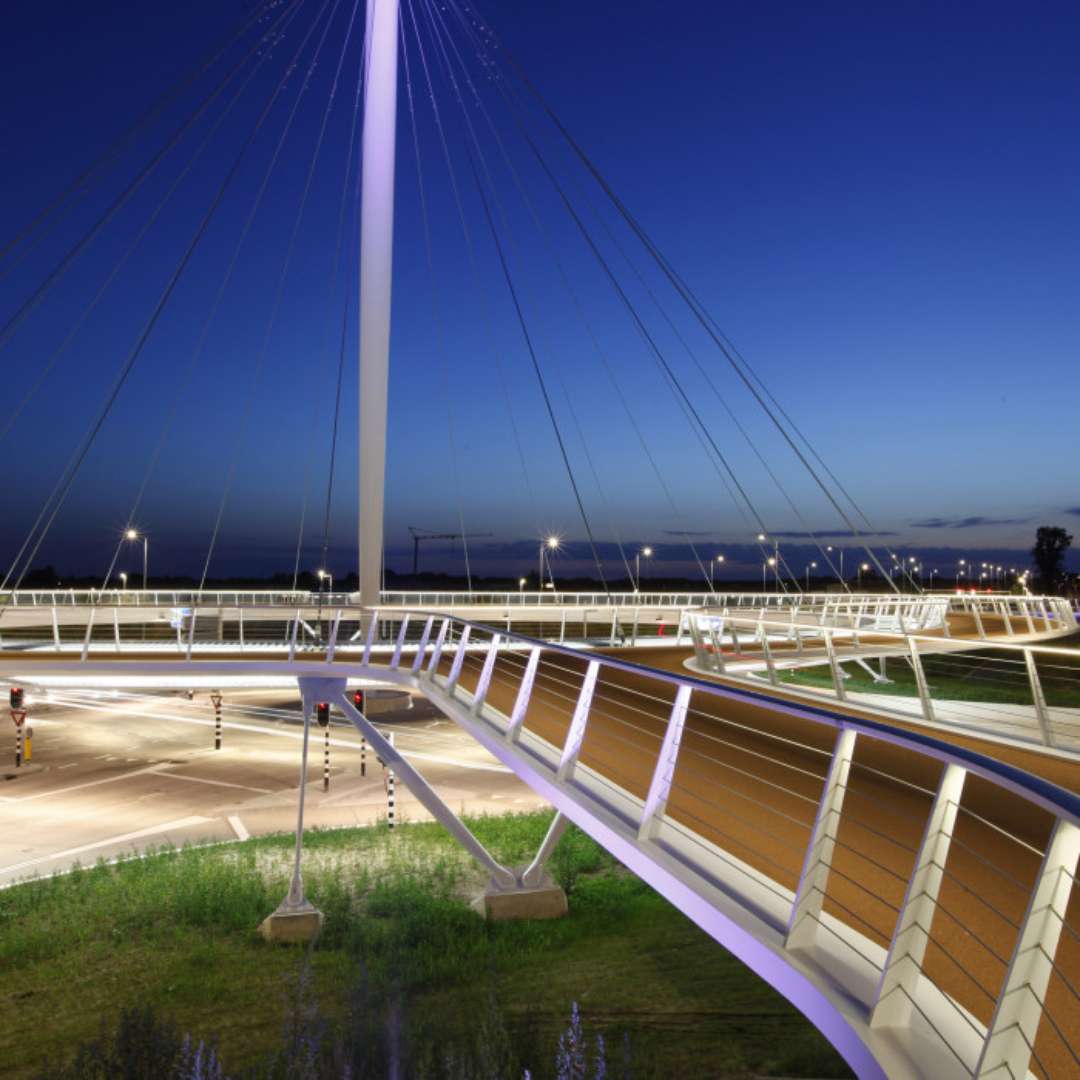 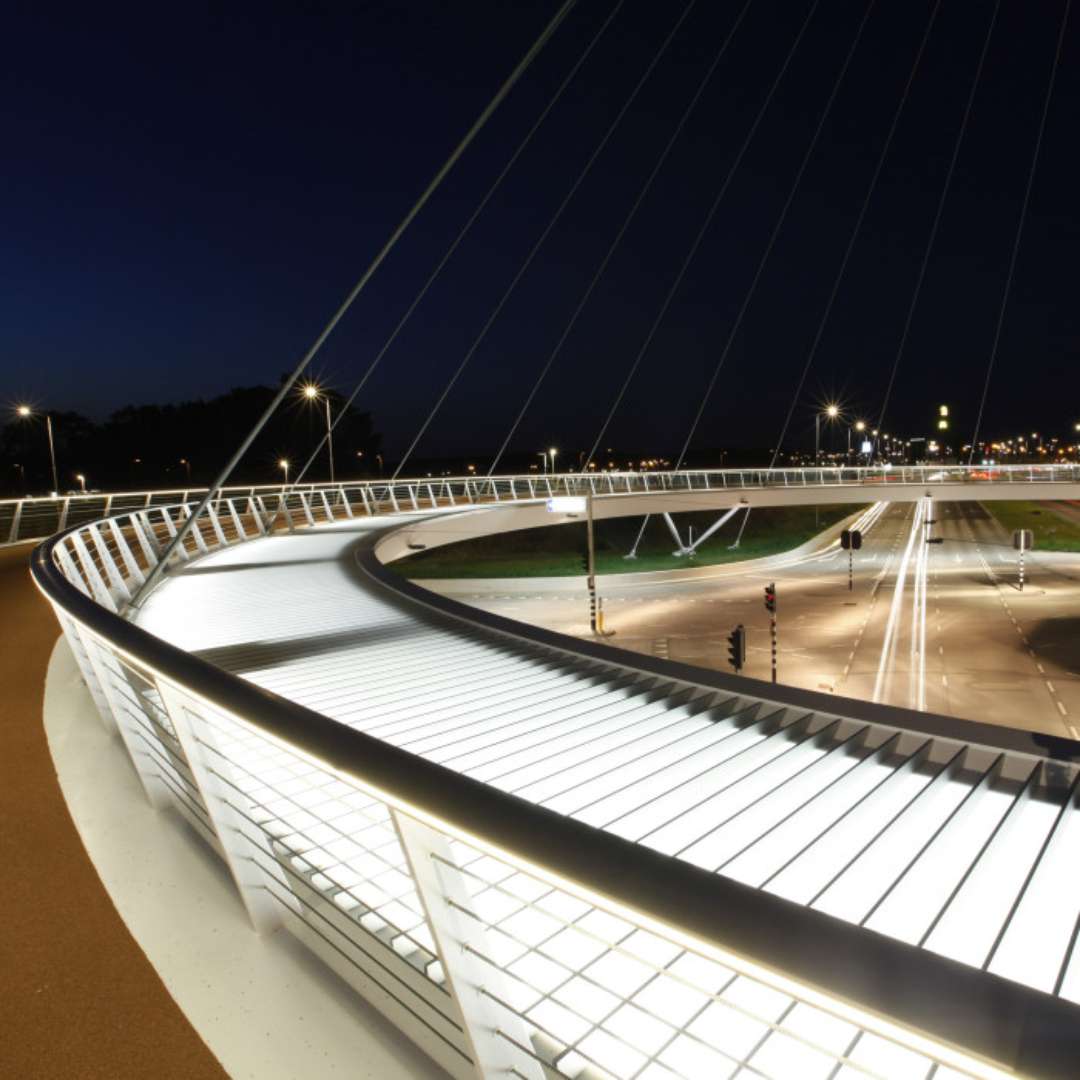 HOVENRING by ipv Delft, Eindhoven, The Netherlands
On a daily ride to and from Eindhoven, the Hovenring is an exciting moment when a commute briefly turns into a self-powered carousel ride.  The simple yet striking form of this bicycle bridge is what visitors first see as they enter the city. The cable-stayed, steel bridge looks as if it is suspended from the 230-foot central pylon. With the increase in car traffic in conjunction with a new nearby housing development, this elevated crossing was the solution to avoid building a bicycle underpass or a roundabout at the car-heavy street level. 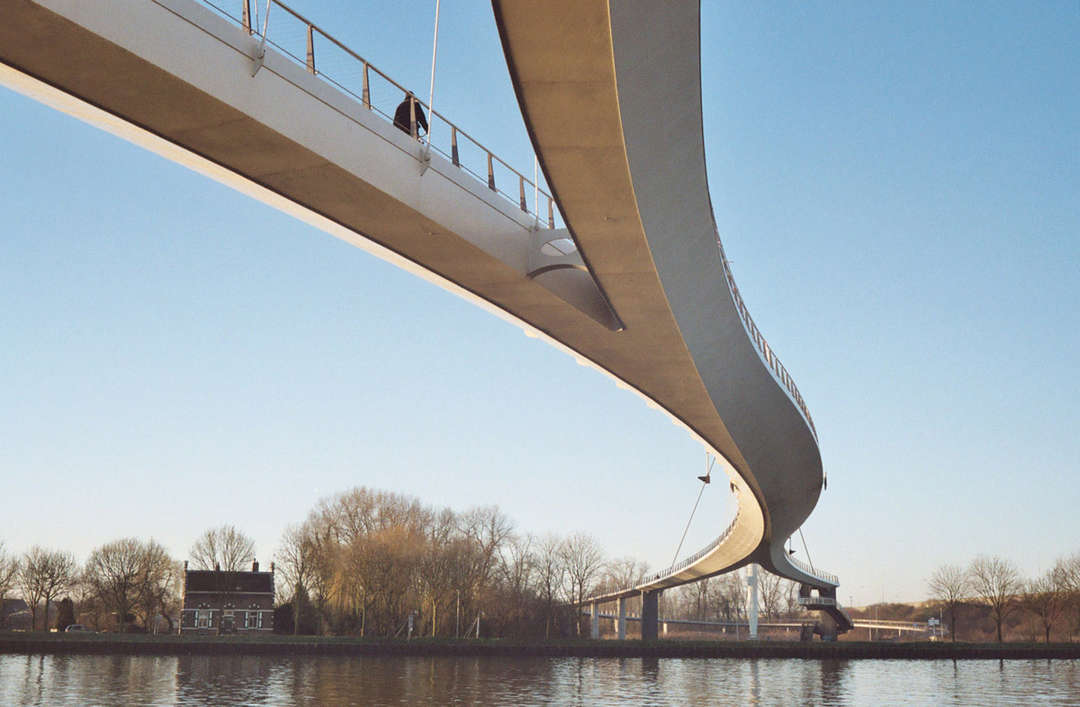 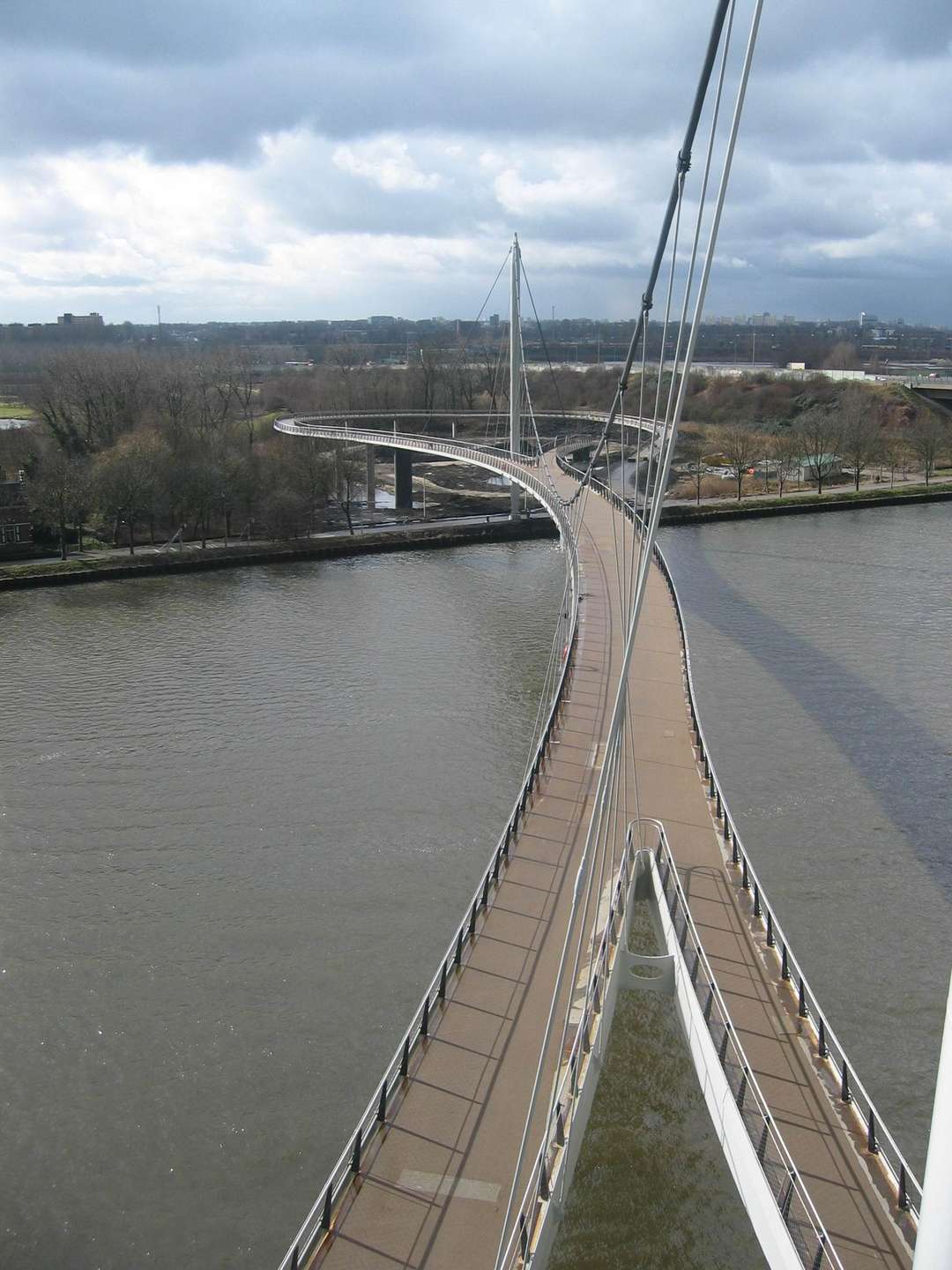 NESCIO BRIDGE by Wilkinson Eyre, Amsterdam, The Netherlands
This soaring suspension bridge in Amsterdam is the longest in the Netherlands, stretching 2560 feet. Suspension bridges are uncommon in the country due to the prevalence of soft soil, demanding of the Wilkinson Eyre architects and Arup engineers a clever and self-supporting structure. The elegant curving bridge forks at both ends to establish separation between cyclists and pedestrians.
Posted by Shade Parade at 4:18 PM 1 comment: