Sidewalk Variances on the BZA Agenda for tomorrow - one more quick email asking that all sidewalk variances be denied?

Sidewalk Variances on the BZA Agenda for tomorrow - one more quick email asking that all sidewalk variances be denied???


For tomorrow's Board of Zoning Appeal Hearing, the request for sidewalk variances include: 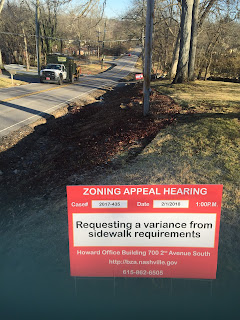 
BZA Page/Information  --- Published agendas can be found via this link at the bottom of the page.

Information about zoning appeals including for sidewalk variance for tomorrow can be found at:


I'm appalled that owner is requesting variance particularly when he is ie) building 3 duplexes!


With the creation of density, we need high quality walking infrastructure aka sidewalks!

I've heard of a case recently where the home owner wanted to build their piece of the sidewalk, had it priced by they contractor, but was told they couldn't, that they must pay the in-lieu fee instead.


If you hear of any cases like this or see a sidewalk variance request, please forward to me.


Here is my email:

I've requested the case file on #2017-435 early on Monday & have still not received it.  My understanding is the case will go before the BZA tomorrow.  I respectfully ask you to send the file ASAP.

I'm also writing to ask that you deny all sidewalk variance requests.  I looked through the list for tomorrow and am appalled that land owners are requesting variances to not build in such great numbers.

We are desperate for walkability in Nashville.  We have just passed our most deadly year in Nashville for pedestrians and it is largely due to our severe and unconscionable lack of safe  pedestrian infrastructure (ie) sidewalks.  Not to mention that we are out of ADA compliance in most of our city in direct opposition to federal law.

Please, I am asking you to deny sidewalk variance fully.  We are  > 60 years behind in creating a walkable city.  We need the sidewalk network to be built and we need it now for our health and safety.


Posted by Shade Parade at 8:25 AM No comments:

Email ThisBlogThis!Share to TwitterShare to FacebookShare to Pinterest
Labels: Creating a Culture of Walking in Nashville, Pedestrian Culture - Nashville

A lot of variance requests have sprung up to ask the Board of Zoning to allow exemption from Sidewalk Bill #493.


If you see these signs, please send them to me.  Unfortunately, it often takes citizen emails to the Board of Zoning Appeals asking that they NOT grant the variance. Your voice is truly needed. These requests come up fast and there is not a lot of time for walking/sidewalk advocates to have a voice so please take a moment and email now (info below)!!! 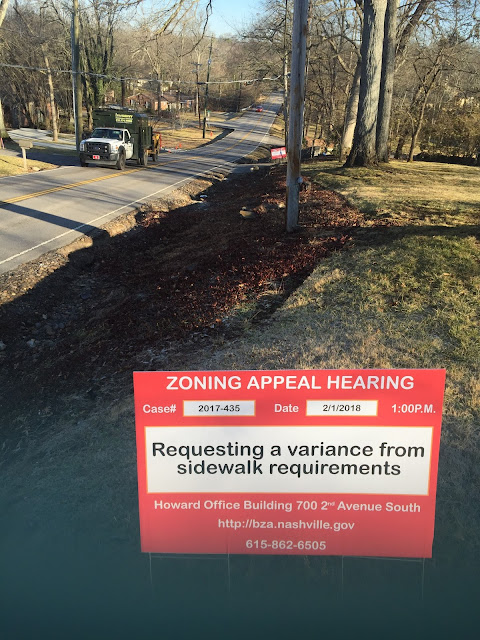 This variance request is on Estes in between Abbott Martin and Woodmont on the east side of the street.  What you cannot see from this picture is that I am actually standing on the sidewalk that is on the adjacent side street. If there is an adjacent sidewalk, a variance is not to be allowed per the law.  This is how we will eventually develop a complete sidewalk network.


As you can see, there is no place for a pedestrian to have safe and comfortable passage on this stretch of Estes.  If I add in legal passage, you can quickly know this is not ADA compliant in any stretch of the definition.


Adding their piece of sidewalk to Estes would be a great gift to the  neighborhood and is the land owners responsibility under current law.


Please take 3 minutes out of your day and write to:


Board of Zoning Appeals (Codes) :  bza@nashville.gov


THANK YOU in advance!!
‎

Posted by Shade Parade at 9:09 AM No comments:

SLOW THE CARS! This is a very clever and catchy article! 
Many people don’t grasp the difference between a street and a road. They think the terms are interchangeable, and rightly so. In the United States, we’ve spent decades — and trillions of dollars — blurring the distinctions. To make our cities financially strong and successful, we need to reclaim the lost art of building great streets, and we must empower our transportation professionals to build high-performance roadways. There is a serious difference between those two pursuits.

Streets: The function of a street is to serve as a platform for building wealth. On a street, we're attempting to grow the complex ecosystem of businesses and homes that produces community wealth. In these environments, people (outside of their automobiles) are the indicator species of success. Successful streets are environments where humans and human interaction flourish.

Roads: In contrast, the function of a road is to connect productive places to one another. You can think of a road as a refinement of the railroad — a road on rails — where people board in one place, depart in another and there is a high speed connection between the two.


Why is this distinction important?

Designing our streets as if they were roads creates three fundamental and interrelated  problems.


First, it’s really expensive. We spend a lot more money on everything from engineering to asphalt when we overbuild our streets. And because poorly designed streets suppress demand for biking and walking — two lower cost alternatives to driving — they actually induce even more demand for transportation spending.


Second, poorly designed streets drive down the taxpayer’s return-on-investment. In general, the more auto-oriented a development pattern is, the higher the cost to provide public services and the lower the value per acre.


The kind of streets that are typically located in auto-centric areas are not only less financially productive, they also tend to be less adaptable, less flexible and thus more financially fragile. The financial struggles our cities face are directly related to the poor financial productivity of our auto-based development pattern.


Third, designing our streets as if they were roads is not safe. These environments combine fast speeds with randomness and complexity, a condition unsafe for drivers and particularly unsafe for anyone outside of a vehicle.


Stroads: The Futon of Transportation

A stroad is a hybrid of a street and a road. Much like a futon, it tries to do two things at once and is forced to compromise on each. A stroad tries to move cars kind of quickly along a corridor that also builds some wealth. The result is expensive infrastructure serving low-returning properties that fails to move traffic quickly while being particularly dangerous.


A stroad is the worst kind of transportation investment we can make, yet we build them all the time. ALL. THE. TIME. If you are driving between 25 and 50 miles per hour, you are probably on a stroad. They are everywhere.


That’s because of the way in which transportation professionals approach street construction. As they do with roads, they start the process by selecting a design speed. They then establish the volume of traffic they are designing to accommodate. Given the speed and volume, they then reference a road design manual to provide recommended dimensions for safe automobile travel. Finally, they calculate the cost of the project.


The order of these values — speed, volume, safety, then cost — works well for roads, but it is nearly the complete inverse of what is needed to build a productive and safe street. Successful streets emphasize safety first — and that’s safety for everyone, not just driver and their passengers— and then focus on cost, volume and finally speed.


If we want a place to be successful, automobile speed can't be the top priority of street designers. It needs to be their lowest priority.

The most compelling thing we can do today to make our cities wealthier and more successful is to substantially slow automobile speeds on our streets.


We need to incrementally shift each of our stroads to become either a street or a road, distinguishing the parts of our existing transportation network over time to emphasize either a street function (wealth creation / complexity) or a road function (traffic movement / simplicity).


And while the fragile financial condition of our local governments is what compels us to make this change, it is clear that building lower cost, higher returning streets will also save lives and improve the quality of life for our citizens.


That is why #slowthecars is such a critical part of implementing a Strong Towns approach.

Posted by Shade Parade at 9:05 PM No comments:

Email ThisBlogThis!Share to TwitterShare to FacebookShare to Pinterest
Labels: Creating a Culture of Walking in Nashville, Nashville, Pedestrian Awareness, Pedestrian Culture - Nashville, Walking as a Way of Life 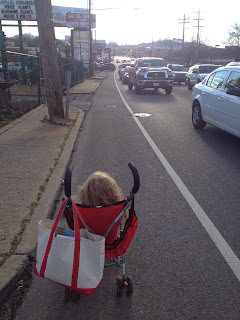 Statement by the Ad Hoc Nashville Coalition for Walking and Biking
The proposed Transit Improvement Program represents a significant step forward improving transit in Nashville but fails to include any details or proposals for sidewalks or bike lanes. Although the plan includes a positive promise of a "more safe and welcoming pedestrian and biking environment" it has no specific proposals for how that promise is to be implemented. Although the program includes extensive information and budgets for other parts of the transit system, sidewalks and bike lanes are overlooked. The WalknBike Plan is not even mentioned in the proposal.
Cities with transit systems far more advanced than Nashville understand that bus and light rail systems are complete only when citizens can easily and safely walk or bike to transit lines. Nashville’s past commitment to bicycle and pedestrian infrastructure was lacking and is only now beginning to catch up to cities with more developed infrastructure. This transit program is an opportunity to make up for those years of neglect.
We are asking the Mayor and Council to amend the plan before final passage to include the following:


Thank you for consideration of these additions to the Transit Improvement Program. The inclusion of our requests will improve the plan and the future transit system in Nashville and Davidson County. 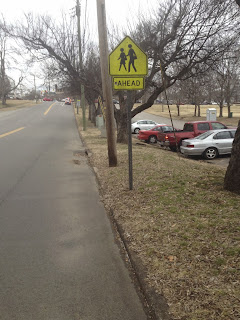 
All three of the new Tennessee and Kentucky episodes of "Perils For Pedestrians" are now online.

'Perils For Pedestrians' Television (http://www.pedestrians.org/), came to Nashville in the Fall of 2017 to explore and discuss walkability and bicycle issues in our city.


Check out links below!

We travel to Memphis, Tennessee.
0:30 - We visit a new bicycle and pedestrian path on the Union Pacific Railroad bridge over the Mississippi River: The Big River Crossing.
11:31 - We look at public space improvements in the Medical District.
18:32 - We drop in on a meeting of the Association of Pedestrian and Bicycle Professionals (APBP).
23:51 - We listen to Mayor Jim Strickland's remarks at the APBP meeting.

The Tennessee Department of Transportation.
0:21 -- The Bicycle and Pedestrian Coordinator,
7:12 -- The Multimodal Planning Office Supervisor, and
13:04 -- The Deputy Commissioner, Chief of Environment and Planning.